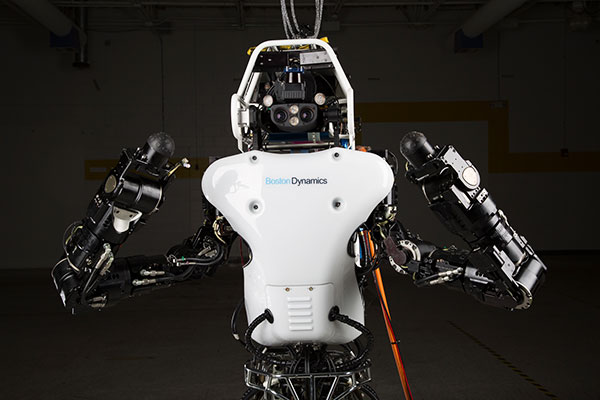 The humanoid Atlas robot made by Google company Boston Dynamics has gotten an overhaul to be stronger, lighter and more independent, and to be able to function for one hour of mixed-mission operations.

Its weight was trimmed from 330 to 254 pounds through replacing everything but the lower legs and feet and using lighter materials — despite including an onboard 3.7 kWh Li-Ion battery pack and a variable-pressure pump.

The battery pack drives the pump for more efficient operation. Now, the robot not only can walk, stand, use tools and make other movements for a whole hour, but also do so unaided — it no longer is attached to cables for support.

Atlas Does More Than Shrug

Atlas’s shoulders and arms have been repositioned to give it more workspace in front and let it see its hands in motion for additional sensor feedback. It has new electrically actuated lower arms for greater strength and dexterity and improved force sensing. It also has more play in the wrist that lets it turn a door handle by rotating the wrist rather than moving its entire arm.

Atlas will be one of the robots entered into the DARPA Robotics Challenge, which will hold finals June 5-6 in Pomona, California.

The challenge aims at developing robots for use in disaster response, and participants will face conditions simulating a real disaster, such as degraded communications.

“It isn’t unusual to lose more lives after a disaster because of some problem with the rescue than were at risk in the first place,” said Rob Enderle, principal at the Enderle Group.

“This is on top of the long-term costs of ailments like cancer recovery workers can suffer from,” he told TechNewsWorld.

Robots aren’t subject to the same ills, and “you can put off repairing them if they get damaged.”

Variety Is the Spice of Robotics

Robots’ designs vary depending on their functions and how their designers want to achieve them. For example, NASA’s entry into the DARPA challenge is Robosimian, a headless robot based on — what else — simian design.

Some box store chains, such as Lowe’s, are using robots to serve customers, and researchers in Japan are working on robots to take care of the elderly and ailing.

However, researchers focus on certain specific areas as a rule. Among the most common fields of robot research, according to Dan Kara, practice director for robotics at ABI Research, are the following:intuitive, multimodal human-robot interaction; dexterous grasping and fine manipulation; safe robot behavior; and adaptation and skill acquisition.

Others are sensor technology and sensing systems, perception and sensor integration, and actuators and actuation.

The DARPA Challenge is among the attempts to augment primary research into robotics and other technologies that “begin with primary research either funded by government entities or initiatives, or by their commercial equivalents, and conducted in public or private research laboratories,” Kara told TechNewsWorld, adding that this model has “proven very effective for generations.”

Much has been made of getting robots to think like humans.

“Attempts to recreate the workings of the human brain in silicon are ongoing, but they have a long way to go,” Kara remarked. These include neuromorphic chips like IBM’s TrueNorth and Qualcomm’s Zeroth processors, and neurocomputational hardware technologies.

The open source OpenWorm project aims to create robots that would be able to think like a nematode — basically a roundworm — and seek to simulate “a very primitive brain” rather than a human one, Kara said.

“You don’t really need a human-like intelligence, and I doubt you’d want one,” Enderle pointed out. “You need something that can quickly identify obstacles, develop a path through them, and then execute a series of generally tightly defined tasks. Human emotions likely would get in the way.”

If the paths of the Atlas researchers and the OpenWorm project intersect, Enderle surmised, “you’d get something closer to the mechanical alien in the movie Edge of Tomorrow than a Cylon.”