Scientists may have just created the most water-resistant artificial material in the world.

Many of those who study hydrophobic materials — water-repellant surfaces in both nature and laboratories — had found themselves at an impasse with a theoretical limit on the amount of time it takes for water to rebound from a surface. However, a team of researchers have achieved a breakthrough: They found a way to reduce a water droplet’s contact time with a surface by 40 percent or more.

The theorized limit of the minimum time a drop stays in contact with a surface is based on the time frame of oscillations in a drop. It was previously believed that minimizing interaction between the water and surface was the key to achieving the theoretical minimum contact time. The thinking was that water rebounded fastest when hitting a smooth surface in a symmetrical shape.

However, the MIT team found that increasing surface interaction time in a certain way could lower contact time beyond that theoretical limit. By adding macroscopic features like ridges that split droplets, the scientists were able to cause the water to rebound in uneven, irregular shapes and reduce contact times by 40 percent.

The breakthrough could have tangible applications in critical environments — possibly to prevent ice buildup on aircraft by repelling rain before it had a chance to freeze. The researchers showed in findings that the droplets bounced off the modified surfaces before freezing, where they would solidify on control surfaces.

The team believes that the contact time can be lowered still, to a 70-80 percent reduction on the original limit, by optimizing the ridged texture. The ridges used in the surface textures can be created using regular milling tools.

“We showed the effect with simple ridges, but we could think of other macroscopic geometries as well,” MIT’s Varanasi told TechNewsWorld.

“Perhaps the most straightforward [way to further reduce contact time] would be to design the texture to fracture the drop into more pieces,” Boston University’s James Bird told TechNewsWorld.

For example, “instead of having the drop fall on a one-dimensional ridge, have the drop fall on a grid, or perhaps many crisscrossing ridges,” he suggested. “Reducing the distance that the film needs to retract to come off the surface will shorten the contact time.”

While conducting the research, the team found a number of surfaces could replicate the uneven breakup of droplets, as long as the ridges were of the correct scale.

Some butterfly wings, for instance, replicate the effect, allowing the creatures to avoid water clogging down their aerodynamic capabilities and effectively improving their chances of survival. Veins in wings act as the water-breaking ridges for the butterflies. Likewise, the leaves of plants in the nasturtium genus have veins on top of their leaves, which break up drops. 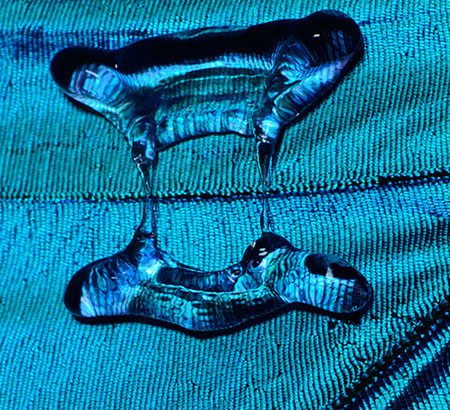 A ridge in the wing of a morpho butterfly, created by a vein within the wing, produces the same effect that MIT researchers found can make bouncing droplets form non-uniform shapes, which causes them to spend less time in contact with a surface. (Image Courtesy of the Researchers)

The ridges can be applied to fabric surfaces to make for safer coatings on waterproof clothing, Varanasi suggested.

The technology could be applied to turbine blades in electric power plants, where keeping the blades dry can increase efficiency, he said. Additionally, it could lower corrosion where acidic droplets damage surfaces.

The technology could be applicable to anything that involves dynamic interactions of liquids onto solids — such as wind turbines or flying robots, Varanasi noted.

“It is possible that these surfaces could curb moisture losses in steam turbines, which could noticeably improve efficiency,” offered Bird.

“One could continue to speculate,” he said. “Our hope is that our paper leads scientists in a variety of fields to pay closer attention to the contact time of bouncing drops, with an appreciation that this contact time could be reduced.”