Virtual and augmented reality and holographic image technologies are coming at us with the speed of a freight train, and it won’t be long until we’ll no longer be able to distinguish between what is real and what isn’t. How we are getting there is kind of interesting. There are some initiatives going on behind the scenes, as well as some breakthroughs, that shortly will make our experience of the world we are living in very different from what it is now.

I’ll close with my product of the week, a new monitor from Philips that could help prevent macular degeneration (age-related vision loss), reduce eye strain and headaches, and improve sleep. I’m kind of surprised this type of product hasn’t shown up sooner.

AMD at the Core of VR

The imminence of virtual reality was driven home with a vengeance today as I started reading The Washington Post. One of the interesting changes some of us heavy Kindle users have undergone is that we now read the morning paper again — but only on our Kindles. So, while I still take the San Jose Mercury News, I mostly now read The Washington Post. It carried a paid op-ed by AMD CTO Raja Koduri about virtual reality — and the fact that we’re at a tipping point.

We are at a tipping point, he argued, and I think he is correct. It’s not just for gaming, but for a variety of efforts ranging from telemedicine (which allows doctors to diagnose and even operate on you remotely), to data visualization, training and a host of simulations.

AMD’s own effort, LiquidVR, is designed to make virtual reality as comfortable and realistic as the real world. Its goal is eventually to create a virtual world experience that is indistinguishable from the real world.

It will involve low latency head-tracking, scalable photorealistic rendering, broad VR headset and control interfaces, and sensory integration. The idea, basically, is to blur the lines between what is real and what is formed from imagination.

This is a cross-company collaborative effort, and it likely will be at the heart of some of the amazing things that are coming.

One of these amazing things is 3D signage, which I have a feeling may become a bit of a hazard if placed near roads or, especially, highways. Using stereoscopic displays — huge versions of virtual reality headsets like Oculus Rift — they will allow images to jump off billboards and literally scare the cash out of you.

The first big one is slated for New York’s Times Square, a location that only someone with a twisted sense of what’s appropriate could argue needs some extra distractions. Granted, the full 3D impact does require you to be close to the sign, but since it apparently will display sharks and large jungle cats, you might not want to stand too close unless you are wearing adult diapers. Still, it is going to be amazing.

I’m not sure if this is creepy, spooky, or some combination of both, but we now have holographic protesters. Amazingly, this isn’t happening in front of Google or anywhere near the U.S., but over in technology-challenged Madrid.

What looked like ghosts took to the street to protest, and the real people apparently avoided any personal risk, fine or incarceration as a result. Imagine if you wanted to take the 1,000 mile march, just clicking on an “accept” tab and allowing your likeness to do the walk for you.

I bet a few Apple fans would like this technology to wait in line for them for that next cool Apple product they so desperately need. Not only could it wait in line — it could scare the crap out of anyone in front of you. Granted, carrying the product out of the store could be a bit problematic.

OK, this does kind of cross the line into creepy, but what if you could live someone else’s life for a period of time. Want to live like Brad Pitt? the queen or prince of England? an Olympic athlete? Virtual reality one day will be able to allow that.

For 28 days, one guy will attempt to use existing VR technology to live someone else’s life to see how that will change him. One person will wear a camera and microphone, letting the one wearing the VR headset have the same experiences virtually in real time. The concept and effort is called “Seeing-I.” I can imagine a future with people selling subscriptions to their lives that other people can step into on demand.

Do you want to date a different attractive man or woman every night? to experience the excitement of a race car driver or other athlete? to experience what it is like to be any sex, any race, any age, in any part of the world, at any time — eventually even past times? This is the beginning, and if we are the culmination of our experiences, this could change us dramatically in new and very interesting ways.

No less a power than Marriott is using VR to teleport vacationers to locations in Hawaii or London (at least initially). They’ll use Oculus Rift to help guests step into their virtual teleporter, which not only includes the 3D VR headset, but also physical elements that will emulate wind, mist, heat and smells.

You’ll be able to go on a mini-vacation in the tropics in the middle of winter, or check out the scenery in London if you just have a few minutes to spare, while feeling like you are actually there — even though the images are rendered. Travel to a Marriott anyplace and feel like you are anyplace else you want to be. Now that could really be cool.

Wrapping Up: We Are Close to Unreality

We are surprisingly close to a quintessential moment when we’ll suddenly wake up and realize that the stuff we are seeing isn’t real and that we really don’t care that much that it isn’t. Whether we are looking out our self-driving car’s window or wearing a virtual reality headset, the images that shape our lives and personalities increasingly will be manufactured. We’ll be able to come close to walking in other people’s shoes and, perhaps, better understand them.

Once again, the Lady Gaga song “On the Edge of Glory” is playing in my head, because our ability to understand heroes and villains, to live in a James Bond movie, or even to visit Biblical heaven or hell, are about to become real. It’ll seem really sudden when it happens, but the work of decades will come to fruition in just a few months.

I’ve been looking into this of late, because I’ve been having trouble sleeping at night. I read a study that concluded that part of the problem is that our monitors, TVs and tablets put out too much blue light, fooling our brain into thinking it is mid-day, and that we should be awake. 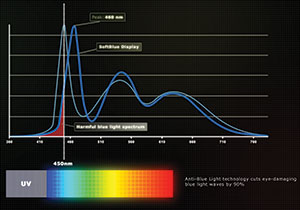 I’ve picked up some blue blocking glasses to help address that problem. Blue light also has been connected to macular degeneration, eye strain and headaches — but I’m not a huge fan of wearing glasses, especially since I spent a small fortune on laser surgery so I wouldn’t have to.

Well, Philips just announced its SoftBlue 24-inch Monitor that blocks 90 percent of the blue light. This greatly reduces damage to your eyes (I have no real desire to be blind, either) and it should help you sleep at night. It sells for a very reasonable US$170 on Amazon. 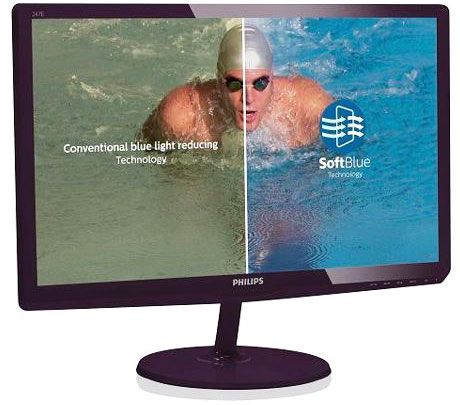 The rest of the specs are pretty good for a monitor in this price range, but the big deal is it could save your eyes and help you sleep better — though frankly, they had me when I realized I wouldn’t have to wear the blue-blocking glasses as much. As a result, the Philips SoftBlue Monitor is my product of the week.