What Comes After Greed in Technology?

I just finished reading a very interesting book by Intel Futurist Brian David Johnson, Humanity in the Machine: What Comes After Greed? Stock market trading systems, venture capitalists and NASCAR teams are all optimized toward a defined goal of winning, in most cases, an excessive accumulation of wealth, he argues. 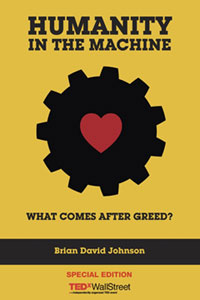 In the financial market, this causes huge crashes; in the VC area, it results in burnouts and Darwinian failures. With people, it results in, well, some really bad people. Johnson supplies examples of people who have found that chasing metaphorical elephants — focusing on big projects that make the world a better place — is far more rewarding, but that’s not what the book is about.

At its core is the idea that we eventually will use machines to make our lives better as opposed to coming up with creative ways to get more stuff. This seems an appropriate subject for this time of year: anticipating the coming of an age when we use machines to enrich our lives rather than just our pocketbooks, and Brian’s book is my product of the week, well, just because.

Greed is the excessive focus on some form of wealth, and whether it is a human defect or hardwired into winners as a way to gain status can be debated. We live to acquire status, because with status comes power.

Historically, power won the best mates, improving the likelihood that an individual’s genes would be carried on. Immortality isn’t in our bodies, but in the bodies of our children and their children. Even if we decide not to have children, the desire for status can be tied to the inbred desire to advance our line. It is pure Darwin.

Much of our lifetime effort is therefore spent on acquisition. So much so that the Pope this year began speaking out against excessive capitalism for placing the haves much too far above the have nots.

Given many of those who have not are starving, freezing to death, or living miserable lives, this gulf seems inhumane. Yet it is all too human.

An actor just died due to excessive speed. He was a passenger in a car that was virtually undrivable on the road.

It was incredibly fast, incredibly expensive, and it provided incredible status. Given that it was also incredibly dangerous, though, it would seem to fly in the face of the premise that greed is at the core of carrying on your genetic material.

This was a machine defined by greed — beautiful, but nonetheless a perfect example of excess. The owner, who was driving when the accident occurred, paid a massive amount of money for a machine that was designed more to kill him than anything else. Granted, Porsche didn’t set out with that goal, but it was designed with excess rather than safety in mind.

In he book, Brian mentions machines used for financial trading that are designed to be blindingly fast, to multiply revenues as optimally as possible, and to take risks that individually might seem reasonable but collectively ensure a market crash, with some percentage of the trading public left destitute. These powerful, hyperfast trading machines are tuned for greed.

In short, they effectively make Ebenezer Scrooge look like a pussy.

If the idea that an individual’s genes will be carried on is at the core of greed, that doesn’t seem consistent with greed’s effects. Many excessively wealthy couples either don’t have kids or have problem children who don’t carry on their genes very well at all.

Greed seems to result in risky behavior — fooling around with dangerous vehicles or with dangerous extramarital partners, for example, either of which can result in premature death or otherwise compromise the success of the line. In many cases, the very rich really aren’t very happy. In fact, a lot of them are pretty miserable.

A few years ago, I encountered a famous, very wealthy actor at an airport. I never really figured out why he sought me out for a chat. Perhaps it was for this column — stranger things have happened in my life. He shared that he was dying and that in the months remaining to him, all he had left to do was divide up his assets. He implied he wasn’t very fond of his heirs.

I didn’t know what to tell him. He wandered off, and both the unique nature of the conversation and my inability to help him have often come back to bother me. In the end, his wealth was something he regretted — not something he was happy to have achieved. Near the end, he felt that he had wasted his life. Personally, I’d enjoyed his work as an actor and felt that was the legacy that justified his existence. I still regret not saying so at the time.

In any case, I think greed is obsolete because it doesn’t result in better progeny, and rather than ensuring happiness, it almost guarantees you won’t be happy. It no longer serves a truly useful purpose — but what comes after greed?

In the book, Brian includes a discussion with Genevieve Bell about the future of cellphones, and she gives the following example: Suppose you call your mother at 4:30 every Friday and she gets on your case or regularly disagrees. making you sad or angry. Yet you call her every week, repeating this same dance. I think we all have one or two regular events like this that make us unhappy, but we still do them out of a sense of obligation. What if your phone broke the habit? What if it stopped you from calling and suggested a path it knew was better? One that wouldn’t upset both of you?

What if, rather than optimizing for risk and profit, a trading machine optimized your investment toward technology that could make your life happier and better, safer and longer, and more fulfilling? It might also make you richer, but rather than that being the primary goal, the goal would be to give you a better life, with wealth defined by how content and happy you are rather than how much stuff you can acquire.

For reasons unique to you, you might invest in cancer research or a vacation home rather than in a risky real estate derivative market.

There are a number of books arguing that we can build machines that will make us better people — with better being defined as happier, more content, and more likely to have children who will carry on not only our genes, but also ideas and concepts that will make us proud. In the end, we wouldn’t have to face death lamenting a wasted life but instead celebrating what we’ve accomplished and knowing that our time on this planet was spent well.

I can’t think of a better thought for the holidays than wishing for a future when our primary goal is for everyone to have not just a Merry Christmas but a merry life. That is why Brian David Johnson’s book Humanity in the Machine: What Comes After Greed? is my book of the week. Nicely done, Brian — nicely done. Merry Christmas to all and to all a good life. 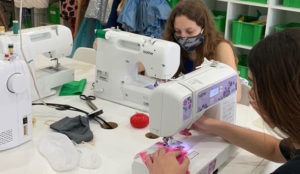 The Art of Sewing’s Hi-Tech Revival