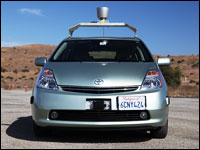 Since then, the cars are still tooling about in a series of tests as early fans watch them in action on YouTube and Vimeo. The tests are going so well that Nevada, Florida and California have already deemed them street-legal. Surely other states will soon follow.

Other than a few glimpses of the tests and an occasional new prototype by GM, Audi and BMW, however, there’s no sign that driverless cars will soon hit dealership showrooms.

For the most part, we obviously have the technology we need to make driverless cars a reality or else we would not see them tootling down the road. So what’s the hold-up with production?

“Semi-autonomous and autonomous vehicles will both run primarily on electronics, which can and sometimes do fail,” Davide Santo, safety and chassis business MCU operation manager at Freescale Semiconductor told TechNewsWorld. “Fail-safes must be in place to ensure that if any systems, particularly safety-critical systems, such as steering or braking, fail or malfunction, other systems are in place to ensure an accident doesn’t occur.”

Obviously, safety is important, but it’s a bit dismaying that we’ve had this same obstacle to driverless cars for decades.

“The self-driving car concept is not new,” John Murdoch, director of technology at Energy Tracking told TechNewsWorld. “General Motors demonstrated self-driving cars at highway speeds in the 1950s. My stepfather, a traffic engineer, studied the subject, and demonstrated its viability, for the U.S. Department of Transportation in the 1960s, and again in the 1970s.”

Back then, highways had embedded guide wires that the driverless cars would follow. The cars used radio and radar to gauge and adjust distances between cars and to maintain highway speeds.

“Everything worked,” says Murdoch. “The concept was proven. With just one, teensy-tiny little wrinkle: the same wrinkle that will effectively prevent Google’s self-driving car from ever achieving scale.”

“The whole thing works perfectly — you can have 10,000 cars an hour going down the Dan Ryan Expressway in Chicago, at highway speeds,” he says. “Right up ’till the moment when somebody blows a tire, breaks a tie rod, or runs out of gas. Then everybody dies.”

So, while we have ditched the idea of embedded wire, radio and radar in favor of sophisticated electronics, we haven’t changed the story’s ending wherein “everybody dies.”

But if that’s the case, why are the test cars not on a killing spree like the car in Stephen King’s story “Christine?” Sure, Google autonomous cars have had two reported fender-benders, but nothing deadly. Besides, Google says driverless cars are more prone to accidents when humans decide to “help” them drive. Hands off the wheel, dude, and you’ll get there accident-free? No, not exactly.

Technology companies are fully aware of this and are hard at work in solving the safety issues. That’s why Intel CTO Justin Rattner said we’ll have driverless cars “within 10 years” but didn’t say they’ll be in showrooms next year.

Intel is working on equipping autonomous cars with low-wattage Intel Atom chips and high-powered Core processors. But they’re not the only ones working on powering the vehicles and solving the safety issues. Obviously Google is, but so is Freescale Semiconductors in its work on sensors, electronic control units, and microcontrollers. Since driverless cars are the hottest thing lately in the auto market, nearly all the players are focused on making the cars work safely.

“Safety, dependability and performance are key considerations, as is the issue of liability,” explains Freescale’s Santo. “Even semi-autonomous vehicles will require huge numbers of sensors with sensor fusion units to ensure the most accurate data possible. There must also be fail-safes in place.”

Many of the technical issues have to do with car-to-car communications. The more cars the merrier — with or without drivers — because more cars communicating with others means more data can be collected in real time that can help resolve safety and rerouting issues.

“I believe that we won’t see even semi-autonomous driving before 2020, if not even later,” says Santo. “There will need to be a large investment in infrastructure to support the car-to-car communications.”

Essentially, this means that each driverless car will not have to figure out obstacles by itself; instead, other vehicles will relay the information in advance allowing time for the car to make the necessary calculations and adjustments.

“Once we have the infrastructure, inter-car messaging will redirect the driverless car around accidents and road work,” Azim Eskandarian, director of IEEE’s Center for Intelligent Research Systems and professor of applied sciences at George Washington University told TechNewsWorld.

“Until then, the driverless car does much the same as a human driver,” he added. “It senses the situation and calculates the appropriate reaction such as stop, go around, or reroute.”

Obviously driverless cars use GPS to route or reroute trips to the desired destination. And we all have tales of how GPS can go wrong. More than one sorrowful soul has found himself by a tree in the woods instead of in front of his true destination, for example. Not to mention the fiasco that is Apple Maps. Then there’s the whole “no signal” thing to contend with, too. Poor driverless cars are likely to be just as confused as we humans in trying to find the way. Well, maybe not.

“If an autonomous car loses its GPS signal, say because it drives into a tunnel, the sensors understand the GPS has failed and adjusts by using local maps to follow on its general, pre-programmed route,” says Eskandarian. “Once it has the GPS signal again, it re-computes and adjusts as needed.”

And what will all this whiz-bang technology look like to the human passenger? Not much different than cars look today.

“The interface will look like the interface you use now with GPS. You type or tell it where you want to go, and the car plans the trip and sets off,” says Eskandarian.

In other words, the technology will be pretty much hidden from view just as it is in cars now. Nevertheless, car geeks will spout off their car’s specs with the same pride as they do now when speaking of their computers and gadgets. And there probably will be an “Intel Inside” sticker or something similar affixed to the glass.

What you will not see are stop signs and traffic lights when a critical mass of driverless cars is met. There’ll be no need as the cars will automatically adjust to maximize traffic flow. Say good-bye to traffic jams, too.

But will the autonomous car really become anything more than geek toys? Oh, yes, indeed.

Pam Baker has written hundreds of articles published in leading technology, business and finance publications. She has also authored several analytical studies on technology, eight books, and an award-winning documentary on paper-making. She is a member of the National Press Club (NPC), Society of Professional Journalists (SPJ) and the Internet Press Guild (IPG). She can be reached on Twitter at @bakercom1.