Why We All Need to Learn to Live on Camera

I was struck by a recent video of a soldier who apparently took some woman’s parking spot and then went off the rails when she objected. He bad-mouthed the U.S. military and the U.S., abused his wife, and put his child at risk.

A decade ago we probably wouldn’t have seen this incident, but now there is a good chance that anyone who misbehaves, as this guy clearly did, will be caught on camera. In many cases, these are life-changing events — and not in a good way.

In some cases, the people caught are serial abusers and should be punished, but often these videos capture individuals who are just having a bad day and letting their anger get the best of them.

Frankly, if a soldier in uniform takes your parking place, you should just point out what they did, thank them for their service, and move on. Giving them your parking spot, given what they do for us, is literally the least we can do. Further, we know that soldiers coming back from a war zone often have significant anger issues.

Of course, you don’t — and shouldn’t — get a pass for abusing a spouse, bad mouthing your service, particularly while in uniform, or bad mouthing the country you serve. This guy is probably done. Still, something of this sort could happen to any of us on a really bad day, when something happens that pushes our buttons and our anger takes over.

Now it used to be that these incidents were localized and without record. Now, with everyone carrying connected cameras (smartphones) all the time, we are one video, picture or social media post away from becoming infamous. One video, picture or post at the wrong time could end our careers, our marriages — even land us in jail.

I think this means we really need to think more about how we behave in public, and that we should take aggressive steps to teach our kids to be more careful. One wrong action or tweet in public and their careers, college prospects, and future lives could be destroyed before they even start.

This brings to mind Walt Disney and the rules he put in place at Disneyland — I think they provide the best example for how we should behave. Those rules appear to be holding despite allegations that the firm has mistreated its employees. Although Disney disagrees, a firm is never really credible in situations like this.

I’ll focus on how we can protect ourselves from ourselves in a world where we are always on stage, and then close with my product of the week: the Lenovo Smart Clock with Google Assistant, a reimagining of what a bedside alarm clock should be.

I used to work for Disneyland, and because there was a lot of trouble at home I kind of lived at the park. I was so enthralled that I’d work two shifts (well, until I got caught) — one paid and one unpaid. Sadly, I found I’d rather be working than be anywhere near my home. One of the aspects of the job always has stuck with me, though, and it allegedly came from Walt Disney himself.

It was the concept of being on-stage, and it spoke to the expected behavior of a Disney employee in the park. The concept clearly came from theater, and the application of the rule was that you were expected to stay in character while on shift, regardless of whether you were in an animal costume, serving food like I did, or operating a ride.

You weren’t yourself. You were a Disney character and you were expected to act that way. Language was monitored, behavior was prescribed, and if you acted out and someone saw you, you’d get fired quickly.

Now this rule was so aggressively drilled into us that there were stories of our costumed coworkers being abused by guests and just taking that abuse, never fighting back. This happened to extremes — there were stories of people actually trying to stab people in costume with knives, or drop-kicking them to knock them over, and those amazing employees, despite being scared half to death, just took the abuse and waited for help. (The park was well monitored, even back then, and I’m not ware of anyone actually getting killed.)

The recent allegations against Disney point to its CEO’s excessive salary and the company’s related inability to pay employees a living wage. Considering its employees are staying in character and not acting out (as they likely would in other firms), you can see how powerful their training is.

The overcrowding in the parks, excessively long lines, and recent unusual heat all lead to guests in the parks acting badly. Yet we don’t seem to have the kind of incidents on YouTube that highlight a Disney park employee losing it.

Given the proliferation of smartphones and the dangers of social media, I think we should all take that old Walt Disney directive and apply it to ourselves. When we are out and about, or when we are online, we should moderate our behavior as if we were on stage with the world watching us. Because, effectively, we are. Everything we do, write and say increasingly is captured and can be used against us at any future time.

Those nasty tweets or Facebook posts could end up as part of your employee package. That time someone took your parking spot and you decided to use racist language suddenly can show up on the news for your spouse, neighbors, parents, coworkers, boss and kids to see. In short, you literally are on stage pretty much all the time — and like the officer says when you are being arrested, what you say and do increasingly can be held against you.

I find that what calms me down is realizing that the other person is on stage as well. If a person is behaving badly, someone is going to take their picture or record a video, and their life could be ruined, so there is no need for me to get upset or engage.

Of course, we have smartphones as well — but honestly, I think it best we leave the destruction of someone else’s life to others, as this too can backfire badly.

What I’m suggesting is that we all begin acting like we are on a reality-TV show, but one in which we’ll get punished for acting out instead of rewarded for it. A lecture in the movie Roadhouse comes to mind: There are three simple rules. It is the last rule that sticks — it is “Be nice.” If you are always nice, always cordial, then your words and actions generally can’t be held against you, and it is the other person who is more likely to get shafted by the world.

We increasingly are on stage for more and more of our lives. Cameras are all around us taping, taking pictures, capturing sound, and categorizing our every move. When we do good things, that isn’t interesting (with some exceptions), but when we act out, that can go viral and change our lives dramatically for the worse.

I’m suggesting that you follow the Disneyland rules I learned years ago and behave as if you’re on stage. Play the character you want people to see you as. And, as Patrick Swayze suggests in Roadhouse, be nice.

I had a second uncle who was a judge, and he perhaps lived this better than I ever could. His name was Claude Owens and the guy was just consistently nice. Family fights, he’d be nice and then disengage. I never saw him lose his temper, never saw him even raise his voice. He arguably was the most admired person in my extended family, and when he passed he was missed by all of us. I still use him as a role model. He was highly regarded by his peers (he’s kind of a legend), and he always seemed to be happy. Regardless of the cameras and Internet, I just think this is a better way to live.

I have an Amazon Echo Spot as my bedside clock, and it is handy — but it was pricey at around US$130. The newer Amazon Show is better priced at under $90, but that is still a lot for a clock, even one as advanced as it is. The top feature of the Lenovo Smart Clock is that it is a very reasonable $60 ($59.99) right now. 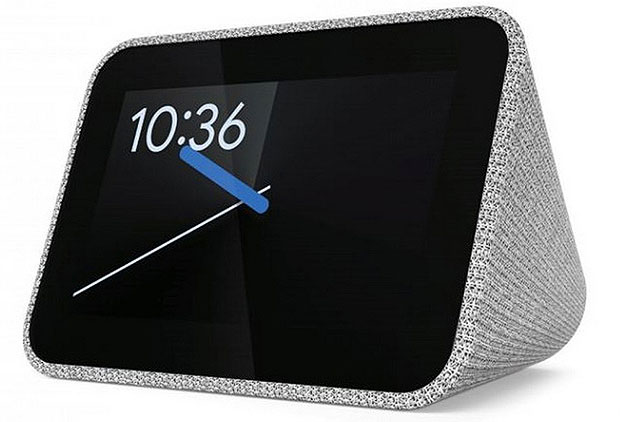 You’ll likely find that while the Amazon Alexa assistant is far more common, the Google Assistant is far better at providing answers, largely because it is connected to Google Search. Like the other digital assistant product, it will do far more than just display time and work as an alarm clock.

Its speaker is surprisingly good (I’m listening to it as I write this) and easily will fill a small room. Of the 43 reviews on the Lenovo site, 27 are five stars, 16 are four stars, and one person gave it three stars, suggesting most of the folks who bought this love it.

One thing it doesn’t have is a camera. Even though the Amazon devices generally have a switch or cover to disable the camera, honestly, if this is going in the bedroom (which is where I’m putting it), I don’t want a camera in the first place.

It has Bluetooth so you can use external speakers if you want, and it also has a USB port for accessories. (Doubt I’ll ever use it.)

The Lenovo Smart Clock has the features you want in a clock and you aren’t paying for features you are likely never to use (like watching a video or making a video call) but it does pretty much everything else you’d want a bedroom clock to do, including showing photos, telling time, providing weather information, and answering questions. At $60 it’s a bargain and my product of the week.