Will Ferrell Calls On Gamers to Launch Cancer Assault 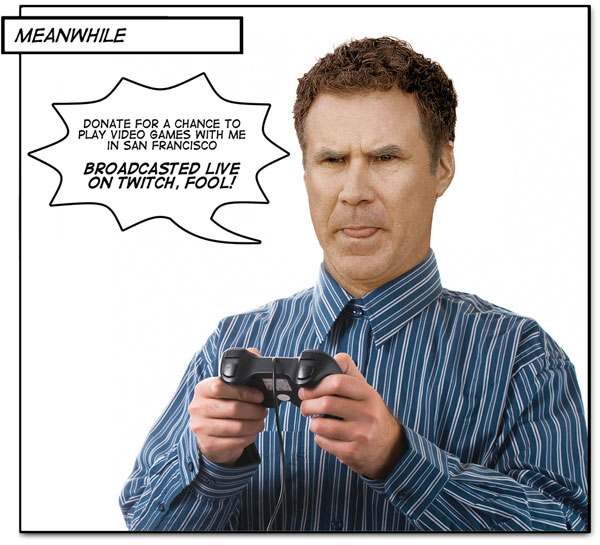 Comedian Will Ferrell on Wednesday announced an effort to battle cancer by giving gamers a chance to participate in a two-hour gaming event with him in San Francisco.

Launched on Indiegogo, the initiative aims to raise US$375,000 for nonprofit organizations Cancer for College and DonateGames, by encouraging gamers to contribute at least $10.

One randomly selected giver will win an all-expenses-paid trip to San Francisco, including the opportunity to play games with Ferrell on Oct. 26.

“Our two-hour gaming extravaganza will be live broadcasted on Twitch for the world to watch, allowing everybody to watch in awe as I, Will Ferrell, show off my gaming skills and crack jokes with fellow top gamers and surprise guests!” Ferrell said.

Also available are a variety of other perks, prizes and giveaways, he said, including a tube of Will Ferrell’s SuperMegaUVBlastMax Gamer’s Sunscreen, apparel, and a signed XBox 360 controller.

‘Game to Give It a Chance’

Pollard, a cancer survivor himself, was a fraternity brother with Ferrell at the University of Southern California; the two have known each other since they were 19 years old. Ferrell now serves on Cancer for College’s board of directors and is often the person who makes the call to notify scholarship winners of their successful status.

“If it’s something he thinks is worthwhile, he’s game to give it a chance,” Pollard said.

Ferrell has three sons, and all three are gamers — as is Ferrell himself, Pollard noted.

“We talked about what demographics are we not speaking to with our charity,” Pollard recalled.

“I played videogames while going through chemo,” he said. “I was explaining to Will that a lot of oncology wings have games to help kids to keep their minds off the chemo.”

Videogames “can have a bad connotation — but in reality there’s a lot of good out there with them,” Pollard pointed out.

“When I see things like this, it brings to mind the idea of celebrities helping to raise funding for charities through public acts of dorkiness,” he said.

As for this effort’s focus on the gaming community, “I think because gamers tend to be tech-savvy and are online often, they’re probably more likely than other demographic groups for this kind of online fundraising,” Ward speculated.

“This is probably going to be a huge hit after the fact on YouTube and elsewhere,” he predicted. “I suspect this isn’t the last time we’ll see something like this — I think it will probably be part of a larger trend.”

Indeed, “I think anyone using their fame for charity is great,” Ted Pollak, a senior analyst for the gaming industry with Jon Peddie Research, told TechNewsWorld.

“If the famous person has a hobby where they can connect with the fans of that hobby, it becomes more personalized,” Pollak added. “Whether it is a charity golf tournament or something like this, chances are enthusiasts will pay more attention.”