2 Smart Backup Apps Show You the Way to Go Home

In my dumber days when I ran Microsoft Windows, I was more concerned with backup programs. After I moved into the Linux desktop, I became much less paranoid about system failures. The Linux environment just never crashed.

That does not mean that I never make backup copies of my critical data files. It’s just that I do not worry about the Linux OS crashing to the point that I have to reinstall everything from scratch. That was the nudge with Windows that pushed me to migrating to Linux.

Still, stuff does happen when you entrust your data to a computer. Despite Linux’s resilience, hardware issues can still render the OS, a key program or a file it produced unretrievable. Hey, stuff happens.

So I am prepared for mishaps with two easy-to-use backup programs. Keep and Back In Time take care of my working data and system configuration. Either application does the job without question. But I alternate backup operations so I do not get any surprises. I like redundancy.

Keep is a backup system for the KDE desktop environment. That does not pose a problem, though, if you run the Gnome desktop. Keep installs with the needed libraries to run under Gnome.

This is a reliable and simple app, but it may become a bit more obscure. The KDE community is not maintaining Keep. But it works just fine in its present 0.4.0 version. Just do not look for a version upgrade.

Keep does not need much fine-tuning. Just select the files you want to back up, then decide how often and how many backups to have. The rest happens automatically.

Back In Time is a bit more feature-savvy. But it is still simple to use and mostly a set-it-and-forget-it kind of app. It comes in two flavors: Gnome and KDE. It also offers a root backup version and a non-root user version. More on this feature later.

The sparseness of the interface for an app is often a hint about how complicated or simple the program is to use. The look and feel of Keep and Back In Time are both GUI simple.

In fact, not much difference exists in either app’s interface. The main distinguishing factor is that Back In Time has a few more features.

Back In Time has much in common with the classic backup software Time Vault. They both maintain backups by taking a series of snapshots of specified directories.

In my Windows computing days, I often had to run the system restore program to fix mishaps that occurred when a new software package screwed up everything else.

And my hardware always seem to be inviting in Gremlins that brought havoc to system configurations for no apparent reason.

More so than other “simple” Linux backup apps that I have tried, Keep and Back In Time add that seamless restore capability that makes system-level malfunctions go away.

That is a better comfort zone than knowing you can always reinstall the OS, add your packages from the repositories and reload your data from separate backup storage.

You cannot do backup much easier than having Keep run in the background. The setup panel has options to select a directory to Backup, Restore a Backup, Backup Now, Edit Backup List and View Backup Log.

Under the Settings tab you can select how many days to automatically run the specified backup. You also can set the number of days to keep the backup file before deleting it. One option is to not delete it at all.

You can even tell the configuration panel to notify you if an error happens and when the backup is completed successfully.

One feature I especially like is the ability in Keep to run an rdiff backup routine. This feature is not usually available.

Rdiff gives you the ability to back up one directory into another one. Extra reverse diffs store in a special subdirectory.

This makes it possible to recover long-ago lost files. Back In Time does not do this.

This backup app makes your choices a bit easier. Rather than having to point-and-click your way through the file system, drop-down choices remove the guesswork. 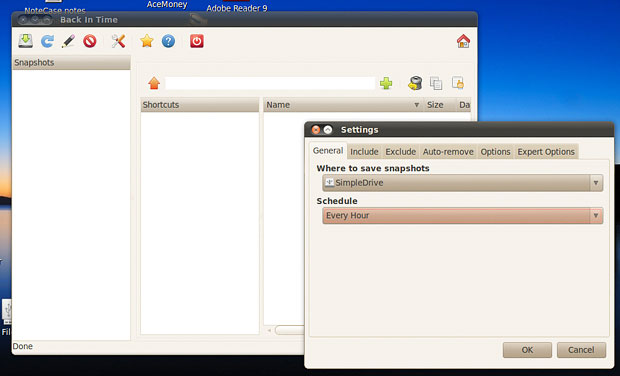 Configuring Back In Time involves selecting where to save the snapshot, choosing what directories to back up and deciding when the backup should be done. The choices are manual, every hour, every day, every week or every month.

The backup process involves taking snapshots of the selected directories at regular intervals.

Back In time comes in two different downloads. This does not matter if your Linux distro provides this app through a package repository.

If it does not, then you can get the source file and handle the compiling yourself. Back In time is written in Python. To install it is to run sudo ./install.sh. This copies the files to where they are needed.

More likely, you can download the software as a .deb package for easy installation.

Back In Time only takes snapshots when changes exist. You can save more space on the storage media by setting it to automatically delete previous backups. Another option is to set an age for deleting older backup copies.

More worry-free results result from the app’s use of the Cron function. It takes up no resources at all when it is not backing up data. The app uses leftover processor power when it does kick in.

When in doubt, just press the Backup Now button in the upper left corner of the window. A new snapshot of your current setup and data now sits on your designated storage location.

The toolbar sits at the top of the window. The main Back In Time interface is divided into three panels.

The timeline is on the left. It shows the date of each backup on your system. A list of the places you most often access sits in the middle portion. These places include your home directory and the data folders you use.

To the far he right lies the contents of the directory currently selected in the middle panel, at the time in history selected at the left side. Here, too, is the Undelete button. This allows you to undo all user errors, hard drive failure and other modifications occurring since the currently selected backup.

Even if you keep duplicate copies of your photos, music and data on more than one computer, you need a reliable backup routine. Having copies of your data does not solve the problem if you cannot access data because the system crashed.

Keep and Back In time make it painless and fast to fix a broken system when disaster strikes. In the world of Linux repairs, you can use either of these apps to go back, resume work and compute happily.