Chakra: A Simple, Strong Energy Center for Your Desktop

Chakra is an unusual Linux distro that rethinks what the Linux desktop should be. It gives users the tools to do it their way. 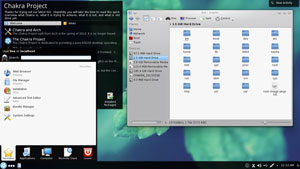 The Chakra Distro Is a Fork of Arch Linux With a Modified KDE Desktop.
(click to enlarge)

This interesting approach to learning what makes Linux tick, however, is not a good starting point for first-time Linux users.

I was intrigued with Chakra’s ground-up reconstruction and the notion that developers need to keep it simple, stupid — as in the KISS Principle. Chakra, though, is clearly a work in progress and needs more maturing before it can attract non-technical users.

In keeping Chakra a purely simple Linux experience, developers stripped away most of the choice that makes Linux more than a one-size-fits-all desktop — it only comes in KDEmod. This is a lean KDE desktop without the meta entanglements that contribute to software bloat. Other desktop varieties — Gnome, Cinnamon, Unity, Xfce and LXDM — do not exist and will not be added.

Even if you love the KDE desktop, Chakra’s software repository is so purified that only certain packages are deemed worthy of inclusion. Other mainstream KDE packages that do not pass the Chakra smell test can not be installed. Unlike other Linux distros, non-KDE software — think Gnome — do not run on Chakra.

Chakra is a recent fork of Arch Linux first released in July 2010. It grew from earlier efforts in 2006 based around efforts to create the KDEmod project exclusively for Arch Linux.

The Arch Linux philosophy is to maintain a desktop that is simple without unnecessary additions, modifications or complications. After sharing that vision initially, the Chakra team fully split from Arch Linux.

The goal is to provide a pure KDE/Qt desktop operating system that is simple and transparent. In essence, that means Chakra is completely devoid of any GTK trappings, as in Gnome Took Kit.

A major difference in the Chakra development plan is the rolling release model for updates the developers follow. Unlike other Linux distros, you never have to upgrade to a new version of Chakra.

Instead, you install the core elements once. The main system updates itself whenever a new (stable) version is released upstream. This system provides users with a stable core of software on top of which other applications can roll.

The core of the system is not updated as soon as possible. Instead, it follows a more traditional approach. The rest of the software is updated following an application-based rolling release model.

If you are unfamiliar with the KDE Plasma desktop, Chakra’s stark, simple KDE version is relatively easy to use. If you are a KDE fan already, the only strangeness will be how Chakra implements it.

KDE has the traditional panel at the bottom of the screen. The K menu applet sits at the left end, and the notifications icons are to the right. Right-clicking on the panel accesses panel options and the Add Widgets menu. Included in the Widgets options is the pager for multiple work spaces.

Chakra includes about a dozen desktop background images to select. The KDE Plasma desktop offers five views. Newspaper Layout puts widgets into columns. Folder View displays the contents of folders. The Default Desktop is a traditional, simple look. The Search and Launch View is a full screen application launcher with search window. The KDE Homerun is an application launcher.

Chakra’s reliance on a modified KDE infrastructure provides a usable set of programs with a fresh installation. I never worried about what decisions other distro developers made about included software packages. I could launch the distro’s package manager to install what I wanted. If the distro’s repository did not stock what I wanted, the Synaptic package system usually did. If not, I could always visit a particular program’s web site.

Not so with Chakra. The available pool of KDEmod packages admitted into Chakra is considerably more limited; using Chakra requires a willingness to work with a smaller inventory of software.

Although I have used Linux for a long time, I have had less exposure to the Arch Linux family line. Testing Chakra involved a bit of a learning curve for me. Chakra is a lot like a specialty distro because of its developers’ purity philosophy. One of the areas where you see this is in the software repository and the update process.

For example, the package management process is a throwback to the early, non-GUI days of Linux — say hello to the command line for this task. Although Chakra’s developers are working on a more automated front-end system, Chakra currently relies on Pacman brought from its Arch Linux roots.

To update system packages, you must open a terminal window, which is KDE’s Konsole utility, and enter the update command: pacman -Syu .

Another oddity with Chakra is the workaround developers take in providing some package alternatives to the strictly pure KDEmod doctrine.

However, they do not install. Instead, the Bundle Manager tool does the semi-automated run routine that temporarily decompresses them. A Bundle is a squashed filesystem. This is an ISO-like image with all the files needed to run the bundled software that runs within Chakra’s environment.

The Chakra Community Repository, or CCR, acts as a sort of bundle police to ensure the purity of the approved software bundles admitted into the Chakra distro. Any new builds will have to first be voted on through the CCR, and only apps that become extremely popular there will be considered for new bundles.

Previously the CCR accepted direct requests for bundles. But that “service” is now discontinued, according to documentation on the Chakra web site.

Chakra’s quest for desktop purity and the one-size-fits-all mentality make this a very unusual distro. Still, I found Chakra to be very stable and useful.

It is not, however, a good choice for the technically shy newcomer to Linux. Those unfamiliar with KDE applications and the KDE desktop will also need some time to figure things out.