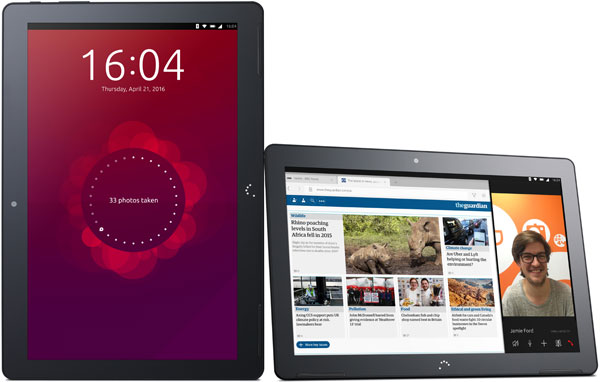 It will ship with the latest Ubuntu software and is the first tablet with the Ubuntu operating system, Canonical said.

The tablet has a 10.1-inch multitactile FHD screen made from Asahi’sDragontrail glass, which is similar to Gorilla Glass.

The device has 2 GB of RAM, 16 GB of internal memory, a MicroSD card slot and a full HD video camera.

The tablet is expected to go on sale in Europe in the second quarter. Pricing has not been announced.

Users can connect a wireless mouse and keyboard to use the tablet as a PC. It also can be connected to a monitor or TV set.

A Side Stage feature allows two apps to be used simultaneously.

Ubuntu’s Scopes feature, which puts up related content on one screen and is used instead of apps, is preloaded on the tablet.

Scopes is touted as an alternative to apps, but “users will crave the in-app mobile experience for the most popular apps,” observed Eric Smith, a senior analyst at Strategy Analytics.

That will be “a big problem for Ubuntu,” he told LinuxInsider.

The Power of Convergence

The Aquaris M10’s OS will run equally well on tablets and smartphones, offering a single visual framework and set of tools for applications that will run on any Ubuntu smart device, Canonical said.

Convergence features include the following:

The desktop experience “is useful but can’t operate as a permanent crutch, so app development will be crucial,” Strategy Analytics’ Smith said.

Consumers will need a stand for their tablets, and “unless there’s a considerable price advantage, [they’d] rather go with the known Windows 10 commodity with a two-in-one keyboard provided,” he added.

The Aquaris M10 compares to “any mid- to low-tier Windows 10 slate, as they’d all have the same ability to provide a desktop mode with a third-party wireless keyboard and a mini-HDMI cable to connect to a monitor,” Smith said.

Tablet sales are slumping, and competition in the market is extraordinarily keen.

Global tablet shipments totaled 70 million in Q4 2015, down 11 percent year over year. In 2015 as a whole, 224.3 million tablets were shipped — 8 percent fewer than in 2014 and the worst year-over-year performance ever, according to Strategy Analytics. That includes iOS, Android and Windows tablets.

That raises the question of whether the Aquaris M10 Ubuntu tablet will survive.

“The fundamental challenge is, can the ecosystem support another OS?” asked Jeff Orr, a senior practice director atABI Research. “Large, established companies like BlackBerry and Nokia can’t carry forward with their own environment, and Microsoft has had struggles creating their own mobile environment.”

Consumers not only want to work with the devices, but also “get the latest content and have it available at the same time as their friends and family,” he told LinuxInsider.

The problem is, the line between business and personal activities increasingly is blurring, Orr said, and tablet manufacturers are trying to figure out what types of hybrid apps work in the environment.