Frantic buyers cleaned out the shelves of two UK retailers offering a small US$35 Linux computer from the Raspberry Pi Foundation. 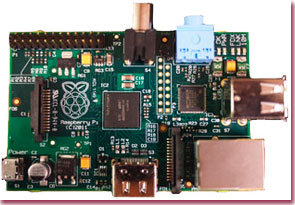 The credit-card-sized device, which is named after the foundation, plugs into a TV and a keyboard. It can be used to work on spreadsheets, play games, and do word processing, and can also play high-definition video.

The foundation entered into licensed manufacture partnerships with two British companies, Premier Farnell and RS Components, which will make and distribute Raspberry Pi devices on its behalf.

Farnell experienced a 300 percent increase in Web traffic and had more than 600 registrations of interest, visits or pre-orders per second, according to a message retweeted by the Raspberry Pi Foundation.

“It’s not surprising that they’re selling out so quickly,” Jim Zemlin, executive director at the Linux Foundation, told LinuxInsider. “For a very low price and with a basic design, the Raspberry Pi puts power in the hands of anyone with an itch to scratch.”

There are two versions of the Raspberry Pi, the Models A and B. The Foundation released Model B; Model A, a more bare-bones version, will follow later this year.

Both models of the device measure about 3.4 by 2.1 inches. They run Debian GNU/Linux, Fedora and Arch Linux. They both have a Broadcom Videocore IV, OpenGL ES 2.0 1080p graphics processing unit (GPU). They can use generic USB keyboards and mice.

Both models have 256 MB of SDRAM that’s shared with the GPU, a composite RCA HDMI video output jack, and a 3.5 mm audio output jack.

For onboard storage, both models have a multicard slot.

The Making of a Raspberry Pi

The Raspberry Pi Foundation licensed Premier Farnell and RS Components to make and distribute its devices to produce them in volume.

The first batch of 10,000 boards was made in Taiwan and China.

The foundation began working on the Raspberry Pi back in 2006 when foundation trustee Eben Upton reportedly assembled a group of teachers, academics and computer enthusiasts to create a computer kids would want to use.

David Braben, another trustee who was involved in developing games such as “Elite” and “Rollercoaster Tycoon,” reportedly headed up the project.

In August 2011, 50 Alpha units of the Model B were manufactured; in December 25 Beta Model Bs were assembled and tested. The Beta boards were demonstrated booting Linux and playing a 1080p movie trailer. In the first week of 2012, the first 10 boards were put up for sale on eBay.

Earlier in February, the foundation released its first proof of concept image that could be loaded onto an SD card to produce a preliminary operating system. That image was based on Debian 6.0 (Squeeze) with the LXDE desktop and the Midori browser. It came with a number of programming tools.

The foundation later released a version of Fedora developed at Seneca College in Canada. It plans to create an app store.

What to Serve With Raspberry Pi?

The Raspberry Pi has incited strong interest in the Linux community.

“I’m the moderator of the embedded Linux group on LinkedIn, and we’ve had some discussion of Raspberry Pi as a platform,” Bill Weinberg, principal analyst and consultant at Linux Pundit, told LinuxInsider. “These are engineers, not just hobbyists.”

The Raspberry Pi is “a cool little board that I think is useful for education and for commercial evaluation purposes,” Weinberg said. “One of the dilemmas in the embedded computing world is to build cost-effective evaluation platforms. Traditional silicon-supplied evaluation platforms can be quite pricey.”

Projects like the Raspberry Pi “will help surface the next great innovator in technology,” the Linux Foundation’s Zemlin said.

The Raspberry Pi Foundation did not respond to our request for comment for this story.