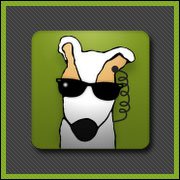 3G Watchdog Pro, an app from Richard Gruet, is available for US$2.99 at Google Play. 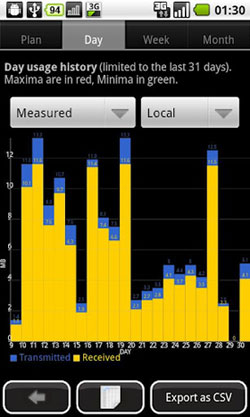 With the preponderance of data quotas imposed by telcos on mobile phone usage and the rapid introduction of data-hogging apps — in particular, those related to TV and music — it may well be time to investigate counters.

Counters let you see how much data you’re using, and warn you of potential overages.

Often, the only penalty for exceeding your provider’s data allowance is a speed slowdown, which you may not notice when performing email and Web-browsingfunctions. However, you will notice that speed slowdown when watching TV apps, like Slingplayer, for example.

Some so-called unlimited plan carriers use bizarre euphemisms, like “fair use policy” to substantiate the slowdown, and then — to add insult to injury — don’t let you buy more data until your next billing period.

In other cases, particularly when roaming overseas, data charges can be many dollars per megabyte, as soon as you touch down.

Getting walloped by a mega-bill or simply having your TV app-watching inexplicably curtailed are good reasons to become watchful of data use.

Richard Gruet, publisher of the Pro version of 3G Watchdog, a mobile data counter available for US$2.99 in the Google Play store, reckons his Android app goes some way toward guarding you against these onerous or expensive overages.

First up, browsing 3G Watchdog Pro’s installed app makes for a fascinating study. Ilearned right off the bat that I had used 19.7 MB in 10.7 hours at home doing nothing in particular — in other words, without watching TV or listening to streaming music.

I’m a prosumer geek savvy enough to know about data roaming costs, but imagineif I were an aging, yet still good-looking retiree off on vacation with his first smartphone, roaming at AT&T’s rack-rate of $0.0195 per kilobyte for some countries. That 19.7 MB of doing nothing in particular would cost $393.35. A petrifying thought.

Advanced data usage prediction, which is included in the paid version of the app, told me how much I needed to reduce my usage to stay within my limits. A Usage by Application feature let me see which apps were using the most data. A newspaper download and network location were two copious data users.

I was also able to see which apps used any data at all. The most basic of apps were using it, according to 3G Watchdog Pro, if in small amounts. Taxi Magic, a taxi booking app, used 3.4 KB despite my not going anywhere.

Rules and options are comprehensive. If your mobile operator counts in blocks androunds up, you can set that as an option.

Having previously used the free version, I liked the way I could import that data into thepaid version to take advantage of usage prediction and application usage features notavailable in the free version.

I experienced no issues whatsoever; however, there have been reports of some devices not counting properly.

Gruet is forthcoming with device-based anomalies and lists them at the Google Play app page. It would be worth perusing that page before forking over any cash.

Gruet makes theperfectly legitimate point that there are more than 700 potential devices, so some ain’t going to work. Again, I had no problems.

For TV streamers burning through a megabyte a minute, and for international roaming travelers not on a roaming plan, this is a must-have app.

Even if you’re neither, it makes for fascinating smartphone scrutiny.