MeteoEarth: Enjoy the Graphics, If Not the Weather 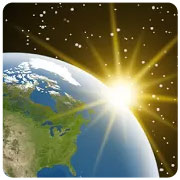 MeteoEarth is available for US$3.99 in the Google Play store.You know those fancy, animated weather visualizations that you get on the local television news broadcasts — the ones with the 3D drill-down dynamic graphics that make it appear as if the meteorologist is directing the clouds? 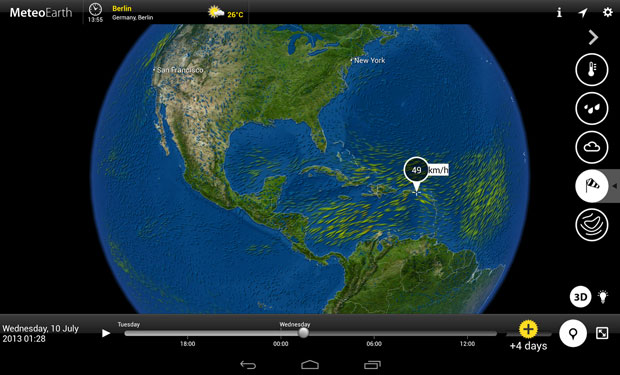 Well, you can now get something similar on your Android device.

MeteoGroup is a European producer of weather-in-motion graphics that it supplies to broadcasters. Recently, it’s made some of its graphic tools available in mobile form.

Not to shatter any illusions, but just like the weather forecasting itself, which is accomplished by scientists in windowless workspaces in drab offices around the world — not the prancing, toothy guy in the shiny suit on TV — many of the visualizations on TV are supplied by third parties. Germany-based MeteoGroup is one of those suppliers.

I’ll go out on a limb here. MeteoEarth is a weather app unlike any other, and once you’ve seen its gaming-like graphics, you’ll want it — even if you’re not a weather geek.

Unfortunately it’s expensive at $3.99 in the Google Play store, plus an additional in-app purchase of $4.99 for a year’s premium features. On the other hand, you’re getting what you pay for.

If you’ve used Google’s Earth product, you’ll have an idea as to what to expect. This app is based around a highly visual 3D globe that, much like Google Earth, is navigated through touch, allowing you to spin effortlessly around, speedily visiting continents with God-like ease.

The globe’s timeline is managed through a Play button on a bar that lets you visualize the high-resolution animated weather-in-motion in one-day or five-day time spans, depending on whether you’ve paid for the upgrade or not.

The whole shebang is compelling and an absolute pleasure to use. I found myself following the direction of moving cloud and watching weather unfold. Great stuff.

Missing features I would like to see in MeteoEarth include street-level graphics and roads — it’d be nice to drill down to the neighborhood level — and storm-tracking overlays. However, I understand that storm tracking is an upcoming feature.

I ran into a couple of issues with MeteoEarth. First, there’s no instruction manual — just a button-by-button description. I found this to be a gaping omission because there are features pitched that I would have liked to have used for the purposes of this review that I was unable to verify, because I couldn’t figure out how to use them. I still can’t.

For example, you should be able to “intuitively” save an unlimited number of default views of a location, weather element and level of zoom. I was able to save one view, but I did have a good laugh at the developer’s use of the work “intuitive” when describing the feature. It wasn’t.

I also couldn’t figure out how to zoom out.

These issues were all probably likely due to my ineptitude, rather than any fault with the program. A help section would have helped.

Heavy weather geeks are going to argue that you can’t beat a set of pixelated, classic overlapping Doppler radars with all the science imaging they provide, like precipitation. However, where MeteoEarth comes in is with an overall picture of developing weather, including wind, and across vast regions.

Like the difference between the scientist in the windowless office and the presenter, it’s a different kettle of fish.

If you enjoy those TV visualizations, buy this app, chomp on some teeth whitener, slap on a bit of fake tan and find some people to show this mesmerizing stunner to, next time weather events unfurl around the world.